An Engadine couple caught up in New Zealand's White Island volcano disaster are on life support in intensive care but are expected to recover, according to an update provided by their daughter to a family friend.

Nick and Marion London were initially listed as missing but were later found in a New Zealand hospital.

The Sydney Morning Herald reported that Mrs London, 56, was in a critical condition while Mr London, 58, had serious hand injuries.

Mr and Mrs London were among 47 people who were on a day trip to view the island's active volcano when it erupted at about 2.10pm on Monday.

David Batten shared an update on the couple's condition on the Leader Facebook page, which he attributed to their daughter Louise London.

"Just wanted to give you a brief update. We're at the hospital with my parents. For the most part dad's injuries seem to be largely superficial apart from his hands. With long-term care they expect him to recover well," Louise wrote.

"Mum's burns are definitely more significant. They're both in intensive care on life support. It sounds like the only major concern is just monitoring and managing infection. Otherwise it sounds like it will be a long road to recovery, but they'll pull through okay."

Ms London said there was a possibility the couple would be flown back to Sydney today with other patients and medical crew for specialist treatment.

Rod Weiner wrote on the Leader Facebook page that Nick had "a heart of gold" and was "such a gentleman on the soccer field for under 45s Bosco".

An Engadine couple are among those caught up in New Zealand's White Island volcano disaster.

Nick and Marion London were initially listed as missing but were later found in a New Zealand hospital where they are being treated.

The Sydney Morning Herald has reported that Mrs London, 56, is in a critical condition while Mr London, 58, has serious hand injuries.

The nature of the eruption on the island, also known as Whakaari, caused survivors to ingest ash and volcanic gases, resulting in horrific injuries.

"There are a number of people in hospital who cannot communicate because they have significant burns not only to skin but to internal organs," Police Minister Stuart Nash told Radio NZ.

"They cannot speak ... or communicate."

Mr and Mrs London were among 47 people who were on a day trip to view the island's active volcano when it erupted at about 2.10pm on Monday. 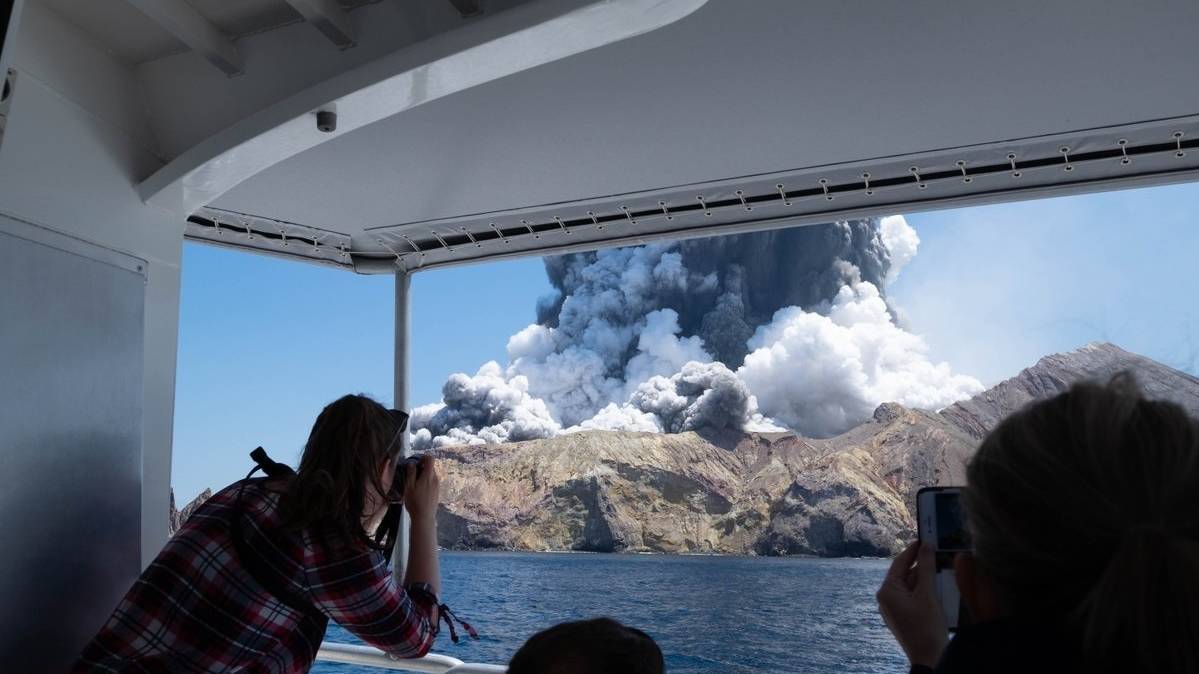 Disaster: This image was taken moments after the volcano eruption on New Zealand's White Island. Picture: Michael Schade via Twitter

Prime Minister Scott Morrison said on Tuesday that of the 47 people on the island at the time, 24 were Australian. The majority were passengers on the Ovation of the Seas cruise ship that departed Sydney on December 4.

Mr Morrison said at the time 13 Australians were being treated in hospital while the remaining 11 were missing. The number of missing has since been revised down to eight.

Mr Morrison said there were fears that at least three Australians were among the five deaths confirmed on Monday and that the country needed to brace for more bad news in coming days.

New Zealand Police confirmed late Tuesday night that a sixth person had died from their injuries. They have already ruled out any hope of finding more survivors.

Paramedic Rusty Clarke was on board a helicopter that flew to White Island on a rescue mission shortly after the eruption.

He likened the ashened landscape to that of a nuclear explosion.

"Looking down on it, I would have to describe it as Chernobyl," he told Radio NZ.

"It was just a complete, absolute whiteout of the area involved.

"It was quite a daunting experience seeing that initial landscape."

Mr London who lists his occupation on Facebook as "International Man of Leisure" was holidaying with his wife Marion, 56.

Mr London was formerly director of investment management at Westpac. The couple has two children.

Their son Matthew London said on Facebook on Tuesday night that the love and care being shown towards his parents "warms my heart".

He said his dad was "always in for a good laugh" and asked those commenting on a post to not judge people "for trying to respond to the shock and pain of disaster with laughter".

"We're human, we all process things differently. Don't let this dissolve into a place of argument and disagreement, only love. Thank you to everyone," he said.

The Leader will publish details of any community initiatives to help the Londons. Email us at leadernews@theleader.com.au.