The Fire Spread Prediction for Saturday shows dangerous fires in Shoalhaven, the South Coast, Snowy Mountains and areas surrounding Greater Sydney, and warns no one should not be in potential spread areas or potential ember attack areas come tomorrow.

It comes as NSW RFS provides updates on the current situation on the ground in affected areas.

"Assessments on the South Coast since January 1 confirm 449 homes destroyed."

The NSW RFS also provided an update on active fires.

At 9.45am 127 fires are burning, 67 are not contained. Around 2,100 firefighters are in the field. A state-wide Total Fire Ban applies today.
Due to the dangerous fire conditions, Leave Zone areas have been identified on the south coast: https://t.co/4jsLTVgOmh#nswrfs#nswfirespic.twitter.com/fE1dczOyt8

Tens of thousands of people are today set to flee the NSW South Coast and other parts of NSW ahead of dangerous bushfire conditions predicted for tomorrrow after unprecedented stretches of the state were declared Leave Zones.

The NSW Rural Fire Service declared a number of Tourist Leave Zones and Leave Zones on the NSW South Coast and other parts of NSW ahead of forecast widespread extreme fire danger, which will be the same or worse as that experienced on New Year's Eve.

"Widespread extreme Fire Danger is forecast for the Shoalhaven area this Saturday," the NSW RFS said.

"If you are holidaying in the Shoalhaven region, you need to leave before Saturday.

"Residents within this area should be aware and prepare for the worsening fire conditions on Saturday."

It followed a Tourist Leave Zone declared earlier that day for the South Coast, "particularly in the general area from Batemans Bay to the Victorian border" - an area stretching 230km.

"If you are planning to visit the South Coast this weekend it is not safe. Do not be in this area on Saturday," the NSW RFS said.

Leave Zones have also been declared for the Batlow/Wondalga region, Snowy Manaro area and Khancoban region, while NSW National Parks and Wildlife Service will close Kosciuszko National Park, issuing a deadline of 10am today to leave the park, including all resorts.

The extreme fire risk led the NSW Rural Fire Service (RFS) to issue a Total Fire Ban, which was put in place at midnight last night, and prompted Premier Gladys Berejiklian to declare a seven-day State of Emergency for NSW for the second time in as many months.

"We don't take these decisions lightly," she said.

"We're concerned that those conditions on Saturday will be worse than what we've experienced in the last few days and that is cause for concern given there are, as I said, too many active fires now."

The State of Emergency will allow emergency services to provide safe access to roads, and to help people travel safely in difficult circumstances.

Police and emergency services also today urged tourists on the state's South Coast and in the Snowy Mountains to adhere to the leave notices.

There are currently 165 bush or grass fires burning across the state, of which 47 are uncontained.

To allow safe passage for travellers out of these areas, the NSW Police Force says it will work closely with Transport for NSW to manage controlled access to various arterial roads.

State Emergency Operations Controller, Deputy Commissioner Gary Worboys, said it was not too late to make a plan to get out of the Leave Zones.

"I cannot stress enough how important it is for anyone who doesn't need to be in these areas to get out as soon as possible," Deputy Commissioner Gary Worboys said.

"Given the large number of people making their way out, significant delays are expected, meaning it will take a lot longer to get home than usual, which means you need to make sure you have plenty of fuel, a fully-charged mobile phone, snacks, and water.

"I'll also reiterate that that your usual travel route may not be safe or accessible - or roads could close at short notice - so, check road closure information and keep checking them along the way." 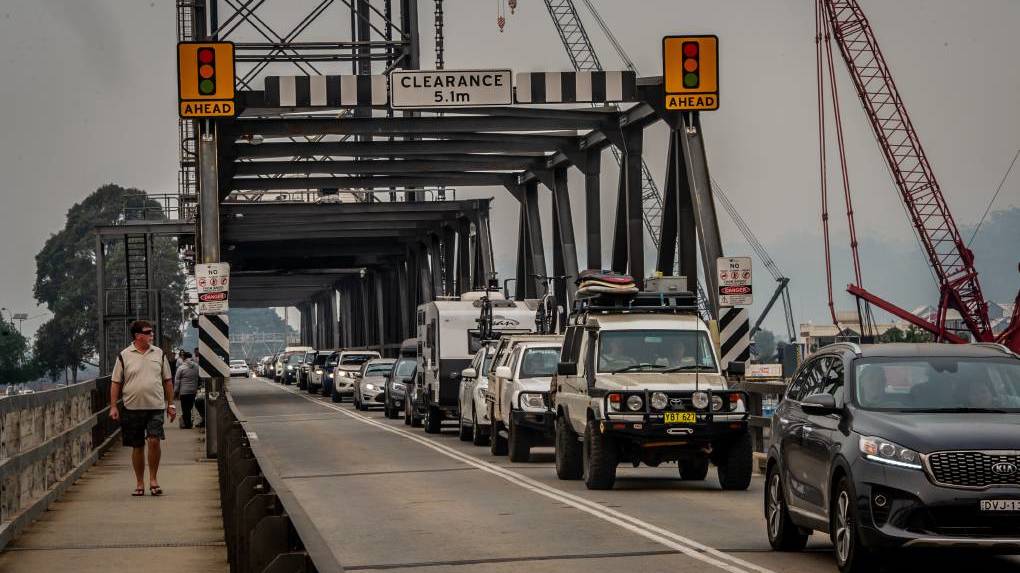 But getting out is not that easy, with large numbers of people stranded due to active fires and widespread road closures.

St George and Sutherland Shire residents have taken to social media in recent days to provide updates to worried family and friends.

One Sutherland Shire woman stranded in Bendalong with her husband and three young children said on Wednesday they were safe but on high alert as a bushfire burned one kilometre away. They had food and water but were without power and had watched while a plane load of firefighting retardant was dropped on nearby flames.

By yesterday morning, they had very limited mobile phone service and were getting by on rations of food and water. By mid-morning, Bendalong Road had reopened but there was still fire activity, so police had enforced a planned evacuation.

"All of Manyana and Bendalong [is] being escorted to leave in groups of 20 via police escort," she said.

"[It] may take two days to get all out. [We] just [need to] sit and wait, and hope it's our turn before Saturday."

But their relief that they may soon get out was shortlived. By Thursday evening, they had been forced to return to their campsite for another night after emergency services deemed it unsafe for them to leave due to active fires.

Others took to social media to share their relief at finally getting home, albeit after many hours.

One person wrote that they had left Mollymook at 9.45am and made it back to Sydney at 10pm - a 12-hour trip that would usually take three hours.

Live Trafic provided the following update on road closures due to bushfires at 5.30am today.

The Princes Highway is open from Milton. Traffic is very heavy northbound, north of Lake Tabourie to Tomerong so take extreme care, follow directions of emergency services and traffic crews. The highway may be closed for short periods to allow emergency vehicles through.

The Princes Highway remains closed in the following locations:

Many other roads remain closed including:

In and around the Snowy Mountains:

A number of smaller local roads are also closed in the South Coast and Snowy Mountains areas, and many roads crossing the NSW/Victorian border are also closed, including the Monaro Highway between Rockton and Cann River (Victoria).

The Public Information and Inquiry Centre (PIIC) is open to assist members of the public in relation to bushfire information for these areas. Call 1800 227 228.