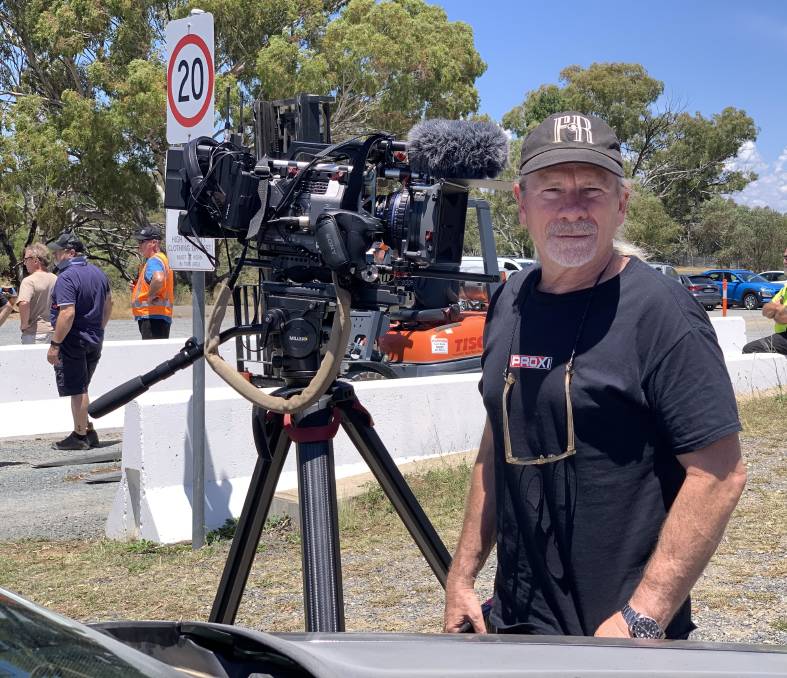 At 18 years old, Guy Norris was setting himself on fire and falling from two storeys up for not much more than beer money and cheers from the crowd.

"We did some mad stuff on a weekly basis," he recalls. "But as a young bloke it was all good fun; all part of the show."

Older and greyer now but still in tip-top physical condition, Mr Norris is arguably Australia's most celebrated stuntman who has given up the high falls to put himself behind the camera, where he could be seen over the past few weeks in and around the ACT.

As the second unit director he brought his stunt team and crew to the ACT to film scenes for the $43 million Hollywood action blockbuster Blacklight, with Northern Irish actor Liam Neeson in the starring role and Aussie Guy Pearce in a supporting role. Emmy nominee Mark Williams is the movie's writer and director.

Neeson has long departed these shores after shooting his key scenes in Melbourne but his face has lingered on, with a stuntman donning a Liam-lookalike latex mask for the Canberra driving scenes. Computer-generated imagery (CGI) is now a stock-in-trade practice to achieve most of the mind-boggling stunts commonly seen on film and television but the important role of the stunt double has a long, spectacular and risky history, dating back further than the Buster Keaton silent movie era.

Long, long before CGI was even imagined, actors like Keaton would perform their own stunts.

When studios realised that losing an expensive star actor to injury would create an unnecessary interruption to a shoot schedule, the risky scenes were then transferred to more replaceable stunt actors.

As a former gymnast, motorcycle rider and self-confessed teenage tearaway, Guy Norris still chuckles when he recalls how he got his start in the stunt business.

"I was 18 years old; I literally saw an ad in the newspaper which said 'stuntmen and women wanted for live shows and TV'," he says. "I thought: 'well, that's got me'. The chap who placed the advertisement was the late Frank Lennon, a former Special Air Services soldier who developed his own stunt training course at Ipswich, inland from Brisbane.

"All over the walls were pictures of people on fire, crashing cars and falling from buildings, and Frank's simple pitch was: 'I can teach you to do all of this'.

Guy Norris was a late starter to the course but a quick study and joined a team which staged Saturday night "thrill" shows as a big attraction at far-flung agricultural shows. The team would drive thousands of kilometres - out west to remote places like Roma and Charleville, south to Queanbeyan and into Victoria - to put on their live shows.

"It was Evel Knievel kind-of stuff; once the show started, you didn't stop," he says.

"You'd have all these fast costume changes where you'd peel the top one off backstage, then race back out again to do the next thing. We'd always do high falls on fire, exploding coffin gags, car crashes, bike crashes, clown acts; anything that had colour and movement in them.

The chances of serious injury from the stunts were ever-present. His worst accident was a broken femur. He had surgery to have a pin inserted, then a few weeks later went back to work. 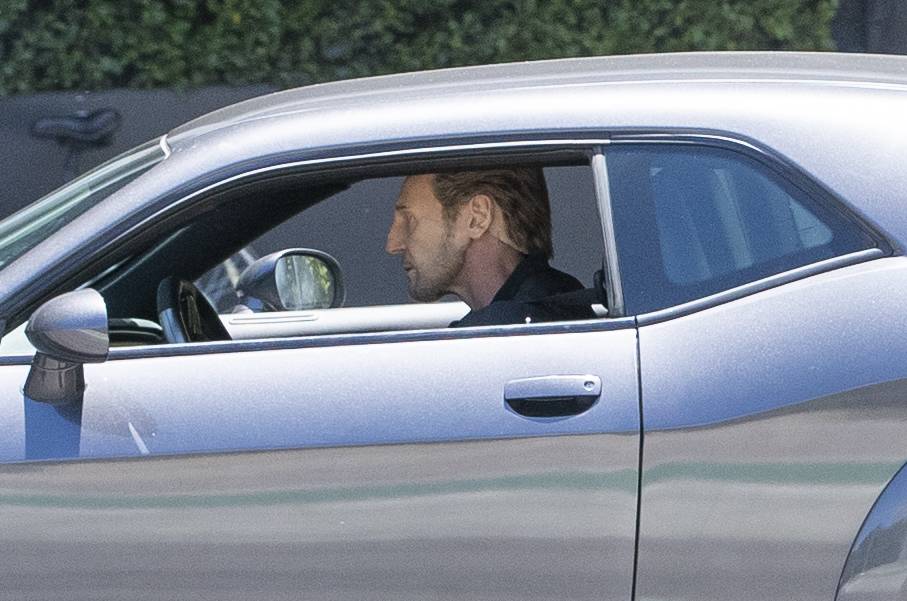 During the course of one of those live shows when he was approached by the late Max Aspin, another legend of the profession who worked on Crocodile Dundee and Razorback and, when standing in for Mel Gibson, performed the most spectacular vehicle stunts in the original Mad Max movie.

"For me, at 21 years old, to get the call from Max [Aspin] to meet George [Miller, the director]. . . well, that was really something. I was on the plane to Sydney in a heartbeat," Norris says.

"There were no showreels in those days; all I had was a photograph album with all my newspaper clippings from where I done the [stunt] shows. "He [George Miller] must have seen something he liked in there so that when I started [in films]."

Being handy with a welder and spanners, he helped to fabricate many of the bizarre Fury Road motorcycles. While performing one stunt, he crashed one of the bikes at 90km/h - setting an unofficial stunt "flying" distance record of 20.3 metres - at 90km/h and snapped his leg, putting him in Broken Hill Hospital for two weeks.

"I was there with the Mad Max crew from pre-production all the way through the shoot so that was my first major feature film," he says. "Mad Max was a huge production at the time, very old-school from a stunt perspective and really physically challenging.

"It was 40 years ago but remains one of the highlights of my working life."

He describes himself as having enjoyed had a "a very fortunate career", with the runaway international success of that movie providing the kickstart.

"Since we did Mad Max: Fury Road, which was nominated for 10 Academy Awards and won six, we've had the ability to take our team - mostly Australians and New Zealanders - all around the world," he says.

"We did X-Men in Montreal, Suicide Squad in Toronto, we've just come back from doing the latest Suicide Squad in Atlanta [Georgia], we did Triple Frontier in Hawaii and Bogota, we did Ghost in the Shell in New Zealand."

And this begged the obvious question: with so many cities around the world actively wooing the big film studios' business, how did Blacklight's stunt sequences end up being shot in Canberra?

"We do a lot of vehicle work and car chases are particularly complex things to set up," he says.

"It costs a lot of money to shut down every street; it's really a big deal.

"The fantastic thing about Canberra is we can shut down five street intersections and we've got this entire fabulous figure of eight in the middle."

He said the production company did exhaustive location surveys and Canberra's street layout "ticked all the boxes".

"We looked at it closely and realised this was fantastic, this [Canberra] was the place," he says.

"I know that I can do exactly what I want here, we can do it in the timeframe and I know it will look great."

He said that there was a genuine opportunity for Canberra to host a lot more of these sequences.

"I think it's an genuine opening for Canberra from a creative point of view," he says.

He and his eldest son, Harrison, are involved in a Gold Coast-based creative company called Proxi which generates a "pre-visualisation" of each scene using virtual reality from Unreal Engine, a powerful content-creating software.

"Proxi uses all the brand new visualisation from the Unreal Engine," he says.

"So what we're able to do is create a photogrammatic version of Canberra, and using Google street views we're able to create a full 360-degree, one-for-one model of downtown Canberra."

The two key vehicles in the stunt sequences - the Dodge Challenger SRT Hellcat and a garbage truck - were created separately and "driven" on the software map.

"After we make the vehicles, we use Playstation controllers and inside a game engine, we can then drive the entire sequence and know exactly where we want to place the cars," he says. "Then we use motion capture to bring people and traffic in. We can have other cars and pedestrians involved, people jumping out of the way, all of that.

"So in this crazy COVID time, we're able to fly down and in a couple of days, get all the digital scans [of the city], go back to our studio in Queensland, do the entire planning, design, choreography, put cameras in it - virtually - and have the entire sequence pre-edited before we even come down to Canberra [for the filming].

"The fact that Canberra is so open to allowing us to close the streets and do what we've done, makes it a world-class shooting location."

Keeping a huge team of people COVID-safe, as well as working within the restrictions of state borders opening and closing at various times has been a massive logistics effort for the visitors.

Supporting the movie "magic" are dozens of people, all with their different roles, knitted together with a communications network to rival a small police force.

Multiple extras, make-up crew, caterers, grips, riggers, drivers, film crew, stunt people, staging teams, together with a raft of different vehicles in both left and right hand drive makes for a large and complex production unit with many moving pieces.

On set, attention to detail and continuity is vitally important so that nothing looks out of place or out of sequence. Studios hate the embarrassment of set stuff-ups, such as the infamous Starbucks coffee cup lurking in the background of a Game of Thrones scene.

Every time a scene is re-set for another "take", it has to look just as it did before the cameras rolled.

For instance, during filming in Canberra's city centre where City Walk meets Akuna Street, a fake flower stall and van was set up with dozens of bunches of plastic flowers in pails - live flowers would never be able to stand the repeated physical punishment - and a red bicycle stood nearby on the footpath.

After the cameras rolled and the garbage truck had barrelled down Akuna Street, mounted the footpath, smashed through the flower stall, mangled the red bike and returned back to its start point for yet another take, a flurry of activity took place.

All the flowers were placed back in their exact same locations and yet another identical red bike was wheeled out - one of about 10 tucked away "out of frame" - to replace the mangled one, before the cameras rolled again.

Once the Canberra material is safely "in the can" and he's back in his Gold Coast studio, Norris and his team will digitally superimpose all the Canberra streetscape with that of Washington DC, where Blacklight is set.

"Working on set is the fun part; there's always a lot to do back at the studio," he says.

While the year has barely begun, Norris' schedule is already full. An edge of excitement creeps into his voice when he discusses, somewhat guardedly, an upcoming Australian production.

"In 2021, our next big project is the prequel to Mad Max Fury Road called Furiosa, again with George Miller directing," he says. "If you can believe it, Furiosa will be twice the scale and size of Fury Road. We will be shooting it all in Australia, and it will be great for the local industry."

Australia's Thor, Chris Hemsworth, and Anya Taylor-Joy, who starred in The Queen's Gambit, are the Hollywood A-listers signed up for Furiosa.

This story Falling into success: former stuntman Guy Norris and his long ride from Fury Road first appeared on The Canberra Times.