The final moments before the gun goes off can be the most daunting. Silence falls across the crowd, the eyes of the world watching and then bang.

What happens next makes and breaks Olympic Games dreams. Athletes who can cope with the noise, the pressure and the expectation thrive. Those who can't miss their moment.

But the Tokyo Olympics will be unlike any other. Ever since the modern Games started, there have been crowds.

Even at the first one, on April 6, 1896, King Georgios of Greece welcomed athletes from 13 nations in front of 60,000 spectators. Every Games since has been a rowdy festival of sport, with athletes and spectators inter-acting to ramp up the energy.

Compared with that, the opening ceremony on July 23 will be a miserable affair. No cheering, no clapping and certainly no high-fiving.

There will definitely be no spectators from outside Japan and the severe limitations on local attendees. The Olympic stadium can hold 68,000 so it will seem all-but empty even if some can attend.

Australian swimmers have famously struggled in the past when the international roar echoes around the pool. World champions freeze on the Olympic stage.

Cate Campbell, the then 100 metres freestyle world-record holder, described her 2016 Olympic performance as "the greatest choke in Olympic history" when she slumped to sixth in the final.

This time the stands will be empty when she and the rest of the Australian Olympic squad arrive in Tokyo next month and they face a new unknown: how will they perform in a dead atmosphere?

"I'm definitely someone who would have loved to have the fans there. Most definitely," Matildas forward Emily Gielnik told ACM. "It's going to be such a different feeling.

"It is difficult knowing there's going to be emptiness and silence. Some people love to play for the fans and they get that energy walking out in the tunnel.

Performance will depend on the player and the sport. Some competitors rise to the roar of a crowd. Others might shrink in front of it. Archers are unused to crowds. Basketballers thrive in the enclosed echoing bowl of a stadium.

Gielnik has experience of playing in empty stadiums with big-time soccer in Europe. Her technique is to imagine the size of the TV audience.

"I definitely get energy from noise but I'm also someone who can create my own energy," she said.

The absence of crowds works two ways, she said. The plus is that teammates can hear each other and hear the bench. Matildas star Emily Gielnik has played in some empty stadiums this year and said it would be difficult to do so at the Olympics. Picture: Getty Images

There will no doubt be noise in Tokyo - but it won't be the live roar of the crowd.

The details haven't been made public but before the postponement of the 2020 Games to this year, organisers held an athletics competition in the main stadium with loud-speakers. Recorded cheering and feet pounding on the floor blared out, reaching a climax as runners crossed the line.

That might work for television audiences but after the experiment, athletes said the event still felt empty, a bit like a time trial or a squad training session rather than a real competition.

The absence of crowds may deflate some competitors but inspire others, according to sport psychologist Jeff Bond who was in charge of psychological preparation at the Australian Institute of Sport for 22 years.

He has been involved in nine summer and winter Olympic Games from Los Angeles in 1984 to Sydney in 2000.

Some athletes "choke" in front of a big crowd but others are energised. Fans enjoy the action at a packed Sydney Olympic Stadium during the 2000 Games. Picture: Getty Images

Without crowds, he expects "newcomers, the people who may not be the favourites, the breakthrough athletes" to do well.

More experienced athletes, who have won medals and honours in previous big events, tend to get re-energised by the roar of spectators and the waving of the national flag.

Those without a track record on the biggest stage may perform better without the roar in the Olympic cauldron. "They are carrying the weight of their country and it just becomes overwhelming," he said.

In the year of Covid, there has now been a lot of scientific analysis of the impact of the absence of a crowd at sports events, particularly soccer.

Researchers studied more than 40,000 matches before and during the pandemic, including more than a thousand professional matches without spectators across the main European football leagues.

Before Covid, they found that the visiting team was disciplined (with a penalty or a red or yellow card) more often than in games in the epidemic era empty stadiums.

As they put it: "Results support the notion of a crowd-induced referee bias as the increased sanctioning of away teams disappears in the absence of spectators with regard to fouls, yellow cards, and red cards."

This rings true with Gielnik's observation on the behaviour of referees. "As a player, it feels like a crowd can have an influence on their decisions - that trigger to blow the whistle when people are screaming at you," she said.

But the researchers found that the effect isn't great. And referees can also be pressured in empty stadiums where they can hear the bench.

"In an empty stadium, you are hearing the fire from the coaching bench," Gielnik said. "So the influence can still be there. If anything, it can be stronger.

"With a crowd it's a larger noise with a bigger vibration but when you are hearing a specific detailed message to a referee that can also be a trigger."

But what about the home advantage of just holding the Olympics? It's not as clear as you might think.

It is true that the host country tends to get far more medals than it did in previous games - but it is probably not because of the crowd willing its teams on.

Every host nation since 1956 has won more medals than it did in the Games four years before, with the exception of the United States which won 101 in 1996 compared with 108 in 1992. 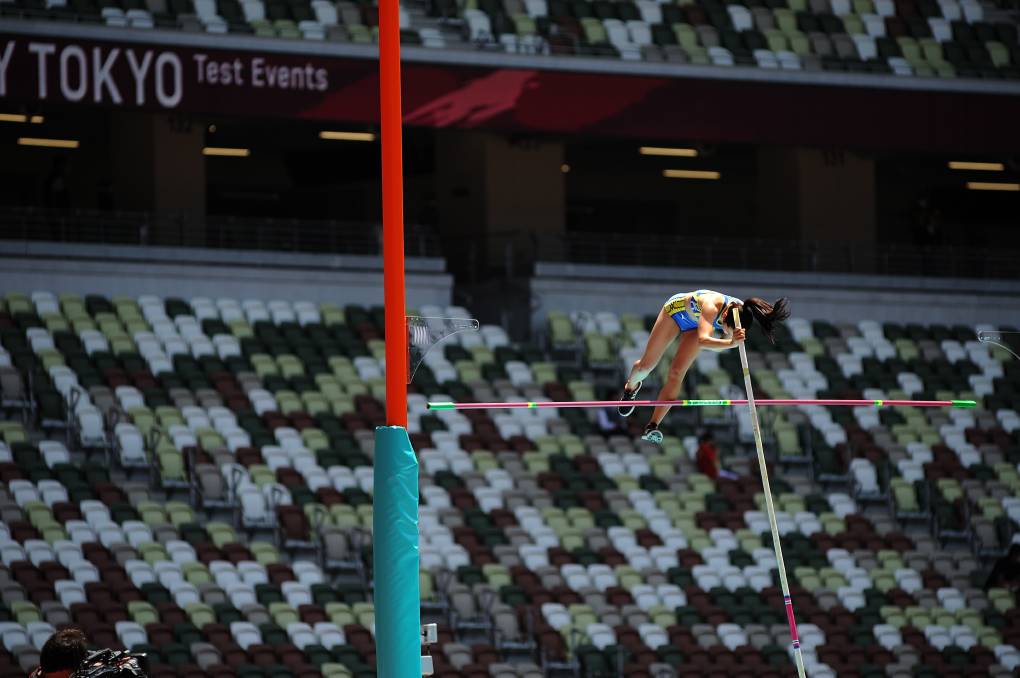 No fans were allowed in to watch the pole vault test event at Tokyo Olympic Stadium last month. The 68,000-seat stadium will be all-but empty again at the Games next month. Picture: Getty Images

But host countries have a non-crowd advantage in that they are granted the right to have a competitor. They don't have to reach the same standard as athletes from other countries. There is no constraint on the number of events host country athletes can enter.

Two statisticians, Stephen Pettigrew and Danyel Reiche have crunched the numbers for the summer Games, making an allowance for this. Their findings indicate that there is no home advantage.

It's true that many of the host country's extra athletes are no-hopers but some are top competitors who can enter more events. More events entered adds up to more medals.

"While some of these 'add-on' host country athletes aren't good enough to contend for medals, elite athletes from the host may participate in more events than they otherwise would," the statisticians conclude.

On top of that, once a host country gets the Games, it pours money into training the competitors of the future. That would surely happen if Brisbane is allocated the Games in 2032. 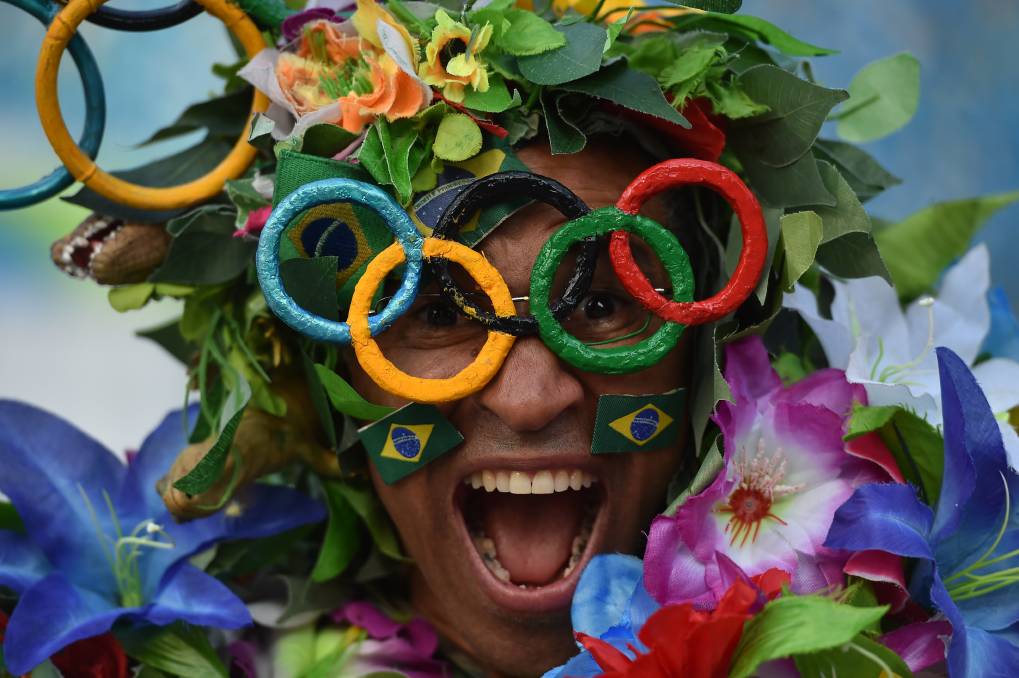 A member of the crowd at the opening ceremony of the 2016 Paralympic Games in Rio de Janeiro, Brazil. Picture: Getty Images

By the way, as television producers contemplate simulating the roar of the crowd in Tokyo, whether in the big open stadium or a small, enclosed velodrome, they might know that there is nothing new about fakery in sports broadcasting.

In the early days of radio, cricket commentators from Alan McGilvray down tapped a pencil to simulate - to fake - the sound of bat on ball.

But the spectators then were real human beings. Cricketers felt the pressure of the roaring crowd. It was part of the drama of competition.

Would Don Bradman have played better or worse in an empty stadium?

This story 'A different feeling': The pressure on players without an Olympic crowd first appeared on The Canberra Times.