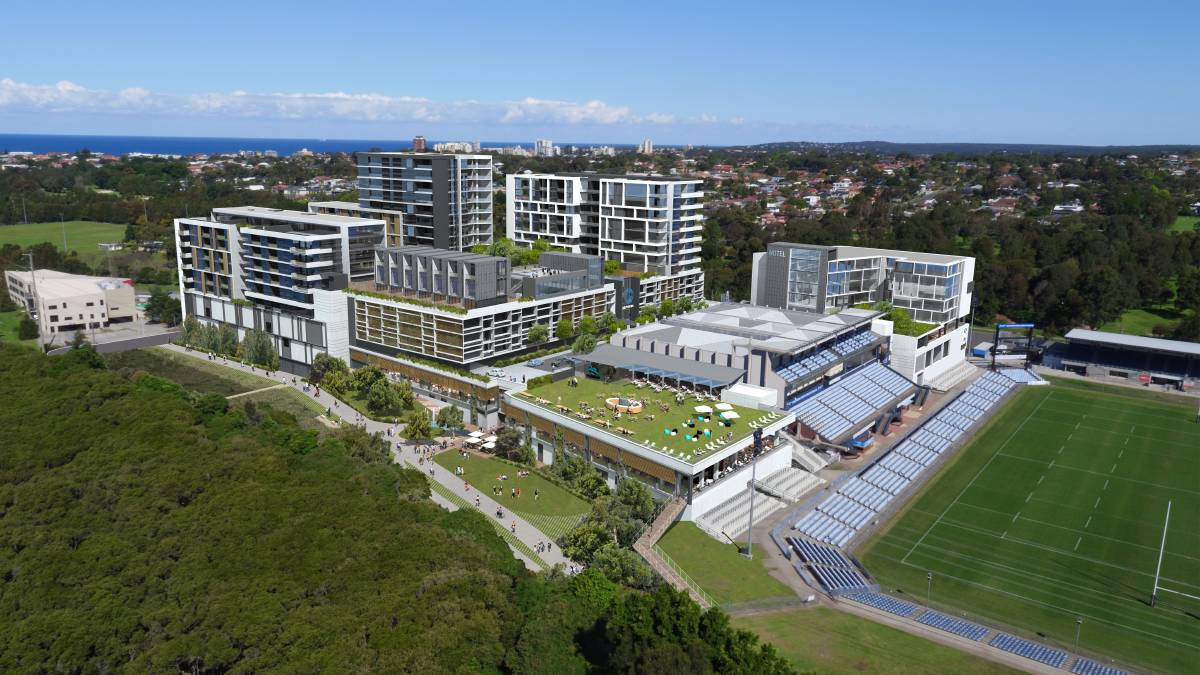 A major expansion of the Cronulla Sharks’ development has been approved, making it the largest in Sutherland Shire with 880 apartments.

However, the site for a proposed $1 million Livvi’s Place accessible children’s playground has been rejected, largely because of high voltage power lines above.

One application was for major changes on the eastern side of the football stadium, where approval was given for an extra 244 apartments in five new residential towers.

With 636 apartments on the western side of the stadium, the development will have a total of 880 dwellings, 38 per cent more than originally approved.

South Village, on the former brick pit site at Kirrawee, will have 808 apartments.

Other approved changes include:

Cronulla Sharks chairman Dino Mezzatesta said the extra units and hotel would “bring an extra level of vibrancy to the retail centre and club, the hotel will allow for more visitation across the entire precinct, which will be a boost for local businesses and provide for a great experience on game days.”

Capital Bluestone managing director Ben Fairfax said approval “signals the final piece of the puzzle for an exciting new town centre in this part of the shire”.

The Department of Planning and Environment recommended approval of the modifications to the original concept plan in March this year over objections from Sutherland Shire Council and residents.

A statement issued by the commission said the panel met with the applicant and department and held a public meeting in Cronulla, but the council declined an invitation to meet and discuss the proposal.

“Residents’ concerns primarily relate to density, built form and urban design, car parking and traffic impacts, and potential damage to the Ramsar wetlands adjacent to the site,” the statement said.

“The commission scrutinised the department’s assessment report, information provided by the proponent, local council and other government agencies, and carefully considered the issues raised by the local community.”

The statement said the commission had approved the modification application subject to conditions.

“In making its determination, the commission concluded the proposed modification does not fundamentally change the essential nature of the development and it remains in the public interest.”

The statement said the commission supported the department’s assessment of key issues and was satisfied with its conclusions, including that there was sufficient capacity of the site to accommodate the increase in housing without causing adverse impacts on the immediate surrounding area.

The commission had also found the changes would provide an increase in housing supply, including a variety of housing typologies, would create a new town centre and the site was serviced by public transport

The commission rejected claims of inadequate parking, saying it was “in line with the objectives of A Plan for Growing Sydney, draft Greater Sydney Region Plan, which encourages the reduction for car parking provisions within urban areas”.

The changes would also “provide a public benefit of 12 affordable housing and 10 first-time owners units”.

In its second determination, the commission told Capital Bluestone to find a better site for the proposed children’s playground, which was proposed to be located on the edge of Woolooware Bay behind the western apartment blocks.

Capital Bluestone had sought to amend the 35-40 metre wide riparian [the area between land and water] setback specified in the concept plan.

The developer requested the Family Hill in the football stadium be excluded from the riparian corridor and for changes to the previously approved landscape plans to include non-riparian uses including a children’s playground and shared pedestrian and bicycle paths.

The commission agreed to exclude the Family Hill, but found non-riparian uses should not be permitted within the inner vegetated riparian zone (VRZ).

It approved shared pathways, viewing platforms and a barbecue area being located within the outer VRZ subject to offsetting

“The accessible children’s playground is not supported in the proposed location within the riparian corridor and underneath high voltage power lines,” the commission said.

“The proponent shall consider alternative sites outside of the riparian corridor and the Ausgrid easement.”

The commission said even though the playground site was outside the Ausgrid protection zone and met the necessary EMF (electromagnetic field) clearance, the electricity network operator was concerned about the playground being within its easement.

The Department of Planning and Environment had also raised concerns about the suitability of the site for a playground.

The department had stated the site was relatively isolated and future users may be deterred by the high voltage power lines.

The Sharks and Capital Bluestone welcomed the approval of approved modifications to Woolooware Bay Town Centre.

“It’s not unusual for projects of this kind to evolve as the ideas mature, we’re very excited about this approval today,” he said.

“The decision today means more opportunities for jobs, for the ability to get into the property market, and a truly integrated community”

“Adding units and a hotel to this development will bring an extra level of vibrancy to the retail centre and club, the hotel will allow for more visitation across the entire precinct which will be a boost for local businesses and provide for a great experience on game days.”

“This signals the final piece of the puzzle for an exciting new town centre in this part of the shire,” he said.

”The property market has made it abundantly clear that the shire needs a mix of units that suit a range of budgets and ages.

“The vast majority of residents already at Woolooware Bay have come from the local area, and there’s a large number of repeat and referral buyers.

“This is a great endorsement of the vision for Woolooware Bay.

“With five percent of apartments allocated to key worker affordable housing, a further five percent allocated to first home buyers only, and 30 per cent of all apartments adaptable to accommodate the elderly and disabled in our community, this will be a secure, convenient, and high-quality option for many members of the shire community.”

Mr Fairfax said other elements in the approved modifications included the introduction of a car share scheme and additional bike storage.

A $1.4 million contribution wouldbe made to upgrading cycleways linking the site throughout Woolooware and to Cronulla.