The Prime Minister has dismissed criticism of him taking advantage of special exemptions and Air Force flights to take a Father's Day trip to Sydney while over half of Australians remain in lockdown as "cheap politics".

ACT Chief Minister Andrew Barr told reporters he could see why people were calling the latest Scott Morrison trip "Hawaii 2.0" - after his much-criticised overseas holiday in the midst of a devastating national emergency.

Scott Morrison has come under new fire over revelations he flew to Sydney to visit his family over the weekend, despite an ongoing lockdown in the ACT and NSW.

He vowed to keep making the trips between Sydney and Canberra on weekends through the lockdowns.

"I'll be heading back home this weekend as well and later in this week when I'm no longer required to be here in the ACT," he told Sky News on Tuesday.

"Frankly it's a bit of a cheap shot, particularly given the leader of the Labor Party and I both understand these arrangements and don't take issue with them - it's just cheap politics."

Mr Morrison boarded an RAAF jet on Saturday before returning to Canberra on Monday. His office stressed his return to the capital was approved by ACT Health.

Scott Morrison's only official engagement on Sunday was a remote address to the South Australian Liberal Party conference, which he did from his Kirribilli residence in Sydney, before jumping on a VIP jet back to the ACT. He said it was an important part of his job to be in Canberra

These were not unusual arrangements for members of parliament, he said.

The Prime Minister has been allowed to skip strict quarantine requirements in the ACT to allow him to stay in contact with is family and staff, which has not been afforded to other members of parliament when travelling from hotspot areas.

He returned to participate in a national security meeting, which often has its principal members dialling in from secure offices in Australia's state and territory capital cities. 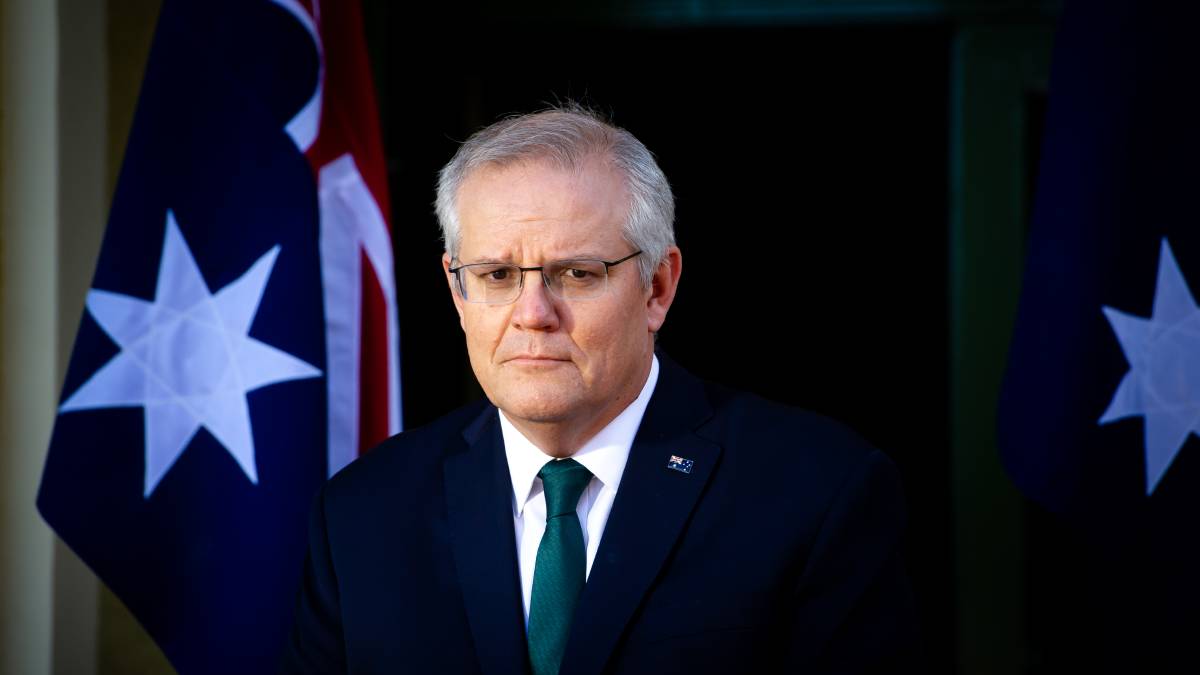 Scott Morrison is coming under fire for a weekend trip to Sydney for Father's Day. Picture: Elesa Kurtz

ACT Chief Health Officer Kerryn Coleman said the exemption for the Prime Minister was based on a "trust relationship" and the onus was on the individual to declare what was essential business.

"It's not up to the Chief Health Officer to make an assessment on the essentialities of businesses in areas that I have no understanding of," she told reporters on Tuesday.

Chief Minister Andrew Barr said it was reasonable for the Prime Minister to return to work to attend National Security Committee of Cabinet meetings, though he was not aware of what options for secure lines existed.

He said he understood why the incident had been dubbed "Hawaii 2.0", a reference to Mr Morrison cutting short a 2019 family holiday during the Black Summer Bushfires, and amid public outcry.

"I understand the frustration. I appreciate that it was not a particularly good look," he said.

"But I'm not the Prime Minister's political adviser, I'm not his keeper. I don't make decisions on his travel.

"He is ultimately accountable to the Australian community for those decisions."

Mr Barr said Canberra faced the complex challenge of maintaining government throughout COVID-19, and Mr Morrison would be limited to the Lodge and Parliament House.

ACT chief health officer Kerryn Coleman would not comment on specific cases, but confirmed Mr Morrison's application was "in line" with ACT guidelines for exemptions.

"It's not up to the chief health officer to make an assessment on the essentiality of businesses in areas that I have no understanding of ... In many ways it is a trust relationship," she said.

Labor frontbencher Bill Shorten on Tuesday said he was surprised to learn of the trip, and was unsure how the Prime Minister was granted a travel exemption.

"It's not that he doesn't deserve to see his kids, but so does every other Australian," he told Channel Nine.

"I think when your people are doing it tough you've got to do it tough too ... you can't have one rule for Mr Morrison and another for everyone else.

"I think it is appalling judgment."

The trip came with NSW, Victoria, and the ACT under lockdown due to COVID-19 outbreaks. Queensland's hard border rules meant hundreds of people gathered at barriers on the border for Father's Day, unable to be with their loved ones.

Mr Morrison was granted a level three stay-at-home order in the ACT, meaning his movements were restricted and he was required to undergo frequent testing.

He was subject to similar restrictions when he re-entered the territory in July.

ACT Health Minister Rachel Stephen-Smith on Tuesday would not comment on individual cases, other than to confirm the exemption was worked through by the territory's chief health officer and Commonwealth chief medical officer Paul Kelly. She said whether MPs should seek exemptions was a matter of judgment.

"Federal MPs and parliamentarians are considered to be essential workers and there's a process in place that's been worked out," she told ABC radio.

"Then it's up to them, I think, to make a decision about whether their decisions are appropriate or not."

A social media post from Mr Morrison on Father's Day included a photo of him with his wife and daughters, stressing it was taken earlier this year. It made no reference to his trip at the weekend.

Our coverage of the health and safety aspects of this outbreak of COVID-19 in the ACT and the lockdown is free for anyone to access. However, we depend on subscription revenue to support our journalism. If you are able, please subscribe here. If you are already a subscriber, thank you for your support. You can also sign up for our newsletters for regular updates.

Our journalists work hard to provide local, up-to-date news to the community. This is how you can continue to access our trusted content: