Like many people, Rick Stein caught the sourdough bug during lockdown. Even after decades in the industry, years of running restaurants, travelling the world for his television shows, writing cookbooks, he, like many of us, retreated to the kitchen during the worst of the pandemic, finding solace and joy in the most simple of tasks.

"I found that making sourdough was almost like life itself," he says, "a sort of sine wave of elation and gloom."

He's keen to talk about his recipe, in that cultish way the sourdough people turned, how his starter is going, how he does use slightly more salt than he should because that's the way he likes it, how now no shop-bought sourdough even compares.

There's a recipe of sorts, more reflection than instruction, in his new book Rick Stein at Home: Recipes, memories and stories from a food lover's kitchen, the reason why we're catching up today via Zoom from his study at his home in London.

The room is full of books, the sun's out on an autumn day, with a breeze blowing through a large tree seen through a window behind him.

The last time I caught up with Stein, and his Australian wife Sas, was at Mollymook, where they have a home and easy access to Bannisters and the eponymous restaurant. They split their time between the south coast, Sydney, London and Padstow, and are hoping to return to Mollymook this Christmas, restrictions pending.

They ended up spending lockdown in both hemispheres as well. First five months in Sydney, then a month in London in late 2020, then more time in Padstow. And he was making sourdough the entire time.

Indeed he spent a lot of lockdown in the kitchen.

"I found I was cooking much more than I usually do when things were normal and I loved it," he says. "It's difficult to say this, because so many people have had terrible times, but I actually rather enjoyed it.

"A lot of my friends, chef friends, have a very busy life, it's almost like you're on a treadmill, and lockdown was a way of getting off that. It allowed me to think about what I really wanted out of my life."

And one big part of that was gathering friends and family around the table over simple, yet tasty food.

"Suddenly the importance of cooking at home became completely clear."

The book is full of things he cooked at home, moussaka, pastitsio, his wife's family recipe for cottage pie, cakes for afternoon tea and several recipes for stock (which was another of his pandemic obsessions).

But it's also something of a reflection on his career, with recipes from the latest television series Cornwall (which you can find on SBS on Demand) some which reflect dishes on the menus at Mollymook and the restaurant at Port Stephens as well as those in England.

He has missed the travel - he's got a new series planned for Italy if they can get it going - but says it's been great to revisit some places through the book and the recipe selection. So many travel memories are linked to food, I suggest, is there a memorable meal he can remember from the many, many countries he's visited over the years?

"For me, the idea of a memorable meal is as much about who you are with as what you ate," he says.

"I remember we were in India and the sub-story for the series was the search for the perfect curry. We just happened to stop somewhere for lunch, we weren't filming or anything, and we had the most wonderful curry, a fish curry, it was snapper or something, and it's the meal I remember from that visit. 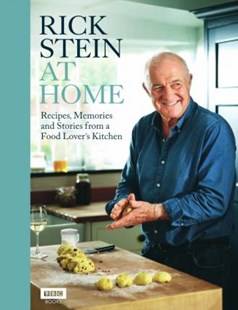 But he agrees that those memories can be made around our own tables.

"That's also what's come out of this book, really, in the thinking behind it, is that the best food for all of us, if we've been lucky enough to be brought up in a happy family, is the food that reminds us of family.

"What I've always done with my cooking in some ways, is trying to replicate the dishes that my mother used to cook, which is sort of quite weird because she was a very simple cook of mostly English, British food.

"But there's something about the idea of going back to that time when you were happy and, comforted is the wrong word, but when everything was in its place."

He acknowledges his privilege but he hopes we've all managed to form some great memories around the table during difficult times.

"Lockdown became, for me, a time to remember the joys of regular cooking at home in a world where the almost limitless possibilities of modern life had suddenly been shut down.

"The delightful importance of cooking regularly for family and friends was the new reality and what a pleasure it was." This is my favourite way of cooking whole fish on a barbecue, but it can be quite tricky and you might want to try cooking it under a grill the first time round. What really works in this is the mayonnaise that's flavoured with fennel herb as well as a splash of pastis and some chopped chives. They give the sauce a bit of onion flavour which seems to work so well.

1. Preheat a barbecue or an indoor grill.

2. Slash each fish three or four times down each side and rub them with olive oil. Season well, inside and out, with salt and pepper, then push some of the fennel herb into the gut cavity.

3. For the mayonnaise, put the egg yolk, vinegar and a pinch of salt into a bowl or food processor and whisk together. Start adding the oil very slowly, literally a drop at a time at first. If you go too quickly, your mayonnaise will split. Then keep adding the oil in a very slow, fine stream until the mixture is really thick. Stir in the Pernod, the chopped fennel and chives. Check the seasoning, adding more salt if required, then set aside.

4. Barbecue the fish for five to seven minutes. Sprinkle each with a teaspoon of Pernod, then carefully turn them over and cook for a further five to seven minutes until they are cooked right through to the backbone. If you're using an indoor grill you probably won't need to turn them over, but they may take a few more minutes. Use the browned side as the presentation side.

5. Carefully remove the fish from the barbecue or grill and serve with the mayonnaise, boiled new potatoes and a green salad.

Tip: You can also make this with sea bream, red mullet, snapper or John Dory. Here's another recipe from my Cornish TV series, something that I cooked on the turf above a beach just outside Mevagissey. I can't name the place because it's owned by a family. This is a version of moules marinière using Cornish ingredients - you can't go wrong really.

a few thyme sprigs and a couple of bay leaves

1. Wash the mussels under plenty of cold, running water.

2. Discard any open ones that won't close when lightly squeezed or tapped. Pull out any tough, fibrous beards protruding from the tightly closed shells and knock off any barnacles with a large knife. Give the mussels another quick rinse to remove any little pieces of shell.

3. Melt the butter in a large pan with a lid. Add the garlic, spring onions, thyme and bay leaves, then cook until softened. Add the mussels and cider, then turn up the heat, cover the pan and leave the mussels to steam in their own juices for three to four minutes. Give the pan a good shake every now and then.

4. Add the cream and the chopped sorrel or baby spinach and remove from the heat. Season with salt and black pepper.

5. Spoon into large warmed bowls and serve with lots of crusty bread to soak up the tasty juices.

Tip: I'm often asked if you should discard any mussels that don't open after cooking. In fact, there's nothing wrong with them, as they're cooked and should be fine. Once in a while, though, you will find that those that don't open are full of sand and mud, so probably best to throw them out. I've mentioned the television series that I recently filmed in Cornwall often in this book, mainly because most of the recipes in the programs are for dishes I cook at home a lot. The runaway success of the series was this apple Charlotte, which I cooked in an orchard at Tresillian House, near Newquay. It's a very special recipe - my mother's and one of her favourites.

1. Grease a pudding basin, about 15cm in diameter and 10cm deep, with plenty of the butter.

2. Peel, core and finely slice the apples. Rinse in cold water and put them in a saucepan with the sugar, lemon zest and 30g of the butter. Cook to a pulp over a low heat and then beat to a purée with a wooden spoon.

4. Melt the remaining butter. Dip each slice of bread into the butter and then line a pudding basin with about three-quarters of the slices. Pack them in tightly and don't leave any gaps. Spoon in the cooled apple purée and cover with the remaining buttered pieces of bread and gently push down.

Tip: I love the clean taste of apple and lemon in this, as cooked by my mum, but you could add a good pinch of ground cloves or some ground cinnamon if you like.

This story What was Rick Stein cooking at home during lockdown? first appeared on The Canberra Times.