Serve up a suitably spooky spread with minimal effort using these easy Halloween recipes. There are even a couple of healthy options using apples and pears.

The ACT Government has given trick or treating the green light, advising people to stick to their own suburb and not to venture into well-known "treat streets" further afield.

3. Turn onto floured surface, knead one minute, adding a little extra flour if dough is sticky. Wrap dough in plastic wrap and refrigerate 30 minutes or until firm.

1. Beat egg white until frothy. Gradually add icing sugar, beating well after each addition. Continue until the icing is firm and holds its shape.

2. Divide mixture into portions and tint with colour as desired; mix well. 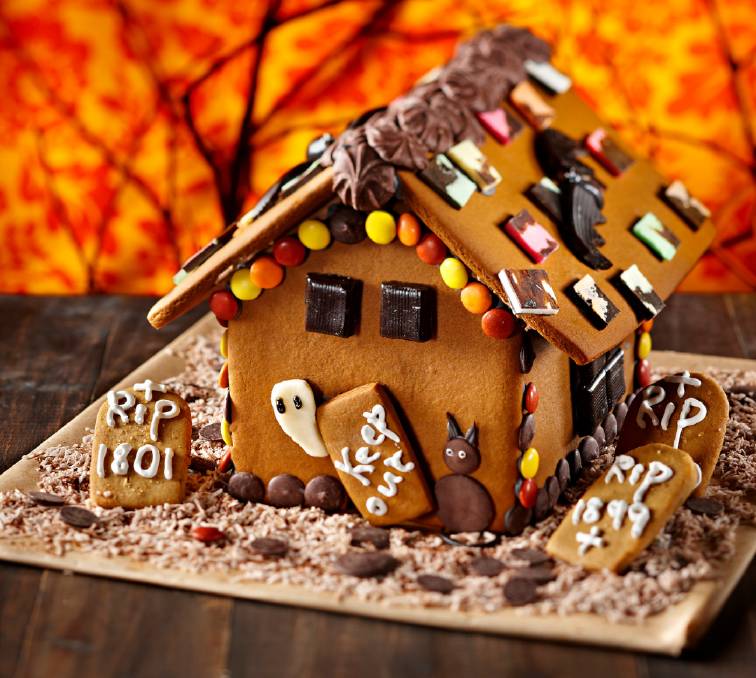 2. Use an electric beater to beat butter and sugar until pale and creamy. Add CSR treacle and egg yolks and beat until combined. Sift flour, ginger, mixed spice, and bicarbonate of soda and mix to a dough. Turn onto a lightly floured surface and knead until smooth.

3. Roll dough between two sheets of baking paper to 5mm thickness on oven trays. Refrigerate for 30 mins. Cut shapes for house using patterns, re-rolling dough if necessary. Cut door from front panel and place 5 cm apart on one of the baking trays.

6. Assemble house using icing to hold pieces together. Use icing to stick on lollies and use white icing pen to write on house. 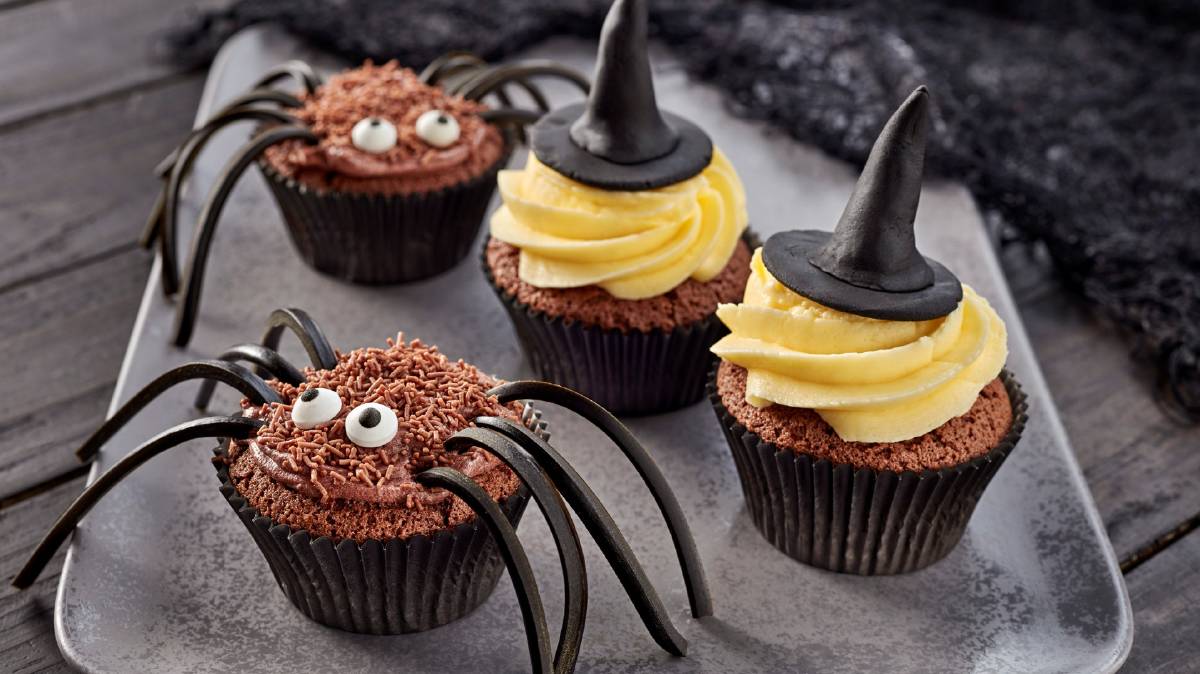 2. Combine chocolate and water in a saucepan and heat gently until chocolate has melted. Allow to cool.

3. Place butter and sugar into the bowl of an electric mixer, beating until pale and creamy. Add eggs one at a time, mixing well between each addition.

4. Sift the flour, baking powder and cocoa. Gradually fold into the butter mixture until well combined. Add cooled chocolate mixture, beating until smooth. Spoon mixture between cake cases and bake for 30 mins. Remove to a cooling rack to cool completely.

5. For the buttercream icing, divide butter into two mixing bowls then beat each until soft and creamy. Gradually add vanilla icing mix and 3 tsp water until mix is smooth. Transfer to a piping bag with a round nozzle and pipe peaks on each cupcake. Repeat with chocolate buttercream icing mix. Decorate with edible eyes, liquorice strips and fondant icing shaped into witches hats.

3. Turn onto floured surface, knead one minute, adding a little extra flour if dough is sticky. Wrap dough in plastic wrap and refrigerate 30 minutes or until firm.

1. Beat egg white until frothy. Gradually add icing sugar, beating well after each addition. Continue until the icing is firm and holds its shape.

2. Divide mixture into portions and tint with colour as desired; mix well. 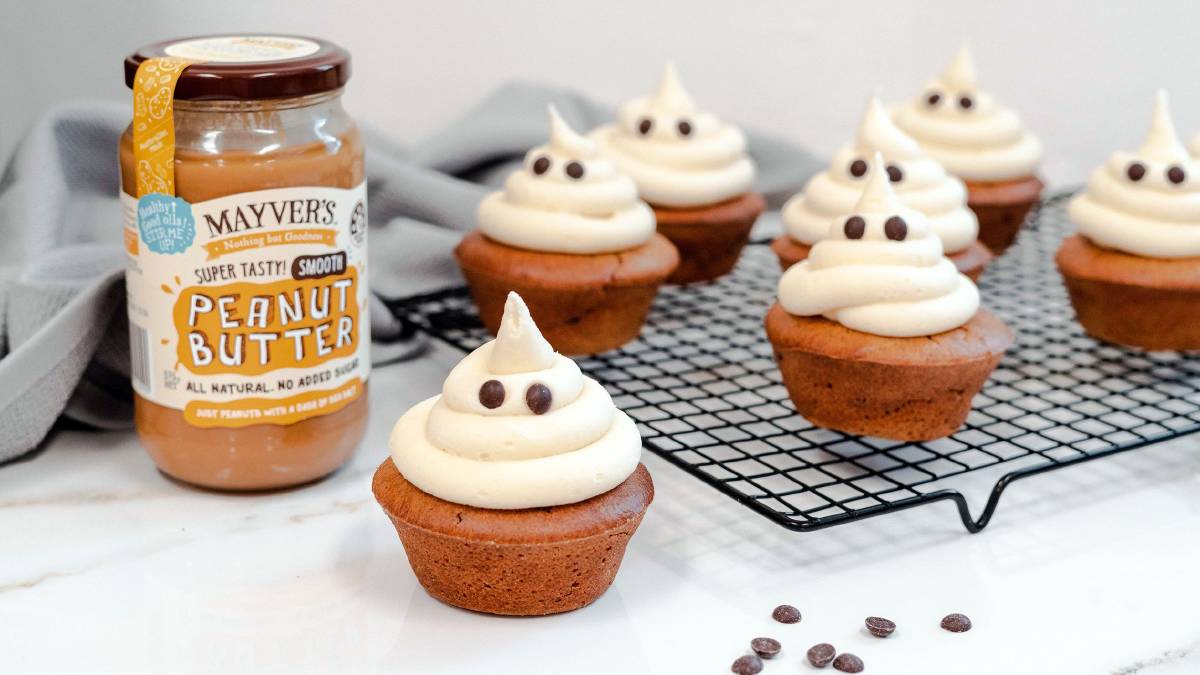 1-2 tsp stevia, adjusted to your liking

2. Grease 10 holes of a muffin tray and set aside.

3. Combine the flour, coconut sugar, baking powder and cinnamon in a bowl.

4. Next, add the peanut butter, eggs, melted butter and coconut milk to the bowl and stir well to combine.

5. Stir through the chocolate chips and divide the muffin mixture amongst the muffin tray.

6. Place the muffins in the oven to cook for 25 minutes, until a toothpick comes out dry.

7. After this time, remove the muffins from the oven and allow to sit for five minutes.

8. Transfer the muffins to a cooling rack.

9. Remove the coconut cream from the fridge. Do not shake or mix the can. Scoop out all of the solid coconut cream and place it in a bowl. Avoid the liquid, leaving that in the can.

10. Add the stevia and vanilla to the bowl and use a hand mixer to whip the cream, until creamy and smooth.

11. Place the coconut cream icing in a piping bag with a round attachment. Pipe the mixture onto each muffin.

12. Once the muffins have been iced, make the eyes by adding two mini chocolate chips to each. 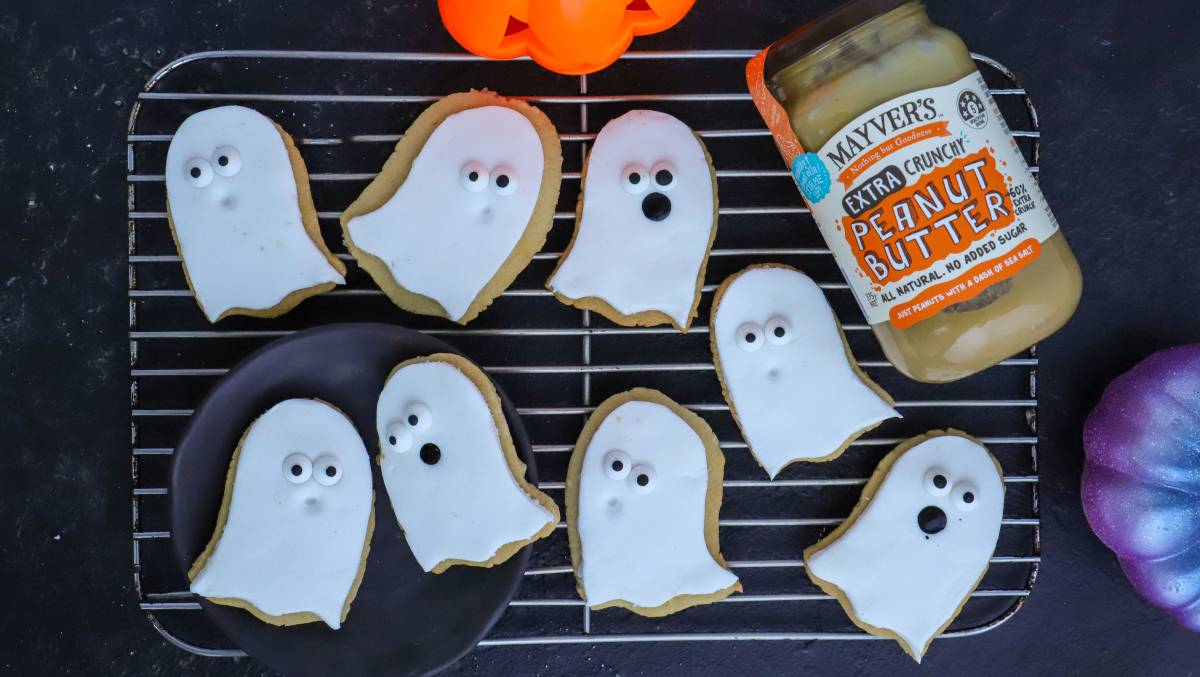 1. Place butter and Mayver's Extra Crunchy Peanut Butter in a medium mixing bowl. Mix well with an electric beater until light and fluffy. Add both sugars, egg and vanilla and pulse until well combined.

2. Stir in baking powder and flour. Place in the fridge for one hour to rest.

4. Use a lightly floured rolling pin to roll out dough on a large sheet of baking paper until 4-5mm thick. Cut out ghosts with your desired cutter and place onto lined baking trays. Repeat with remaining mixture.

5. Bake for 10 minutes or until golden. Transfer to a cooling rack to cool.

6. Decorate with icing and candy eyes. 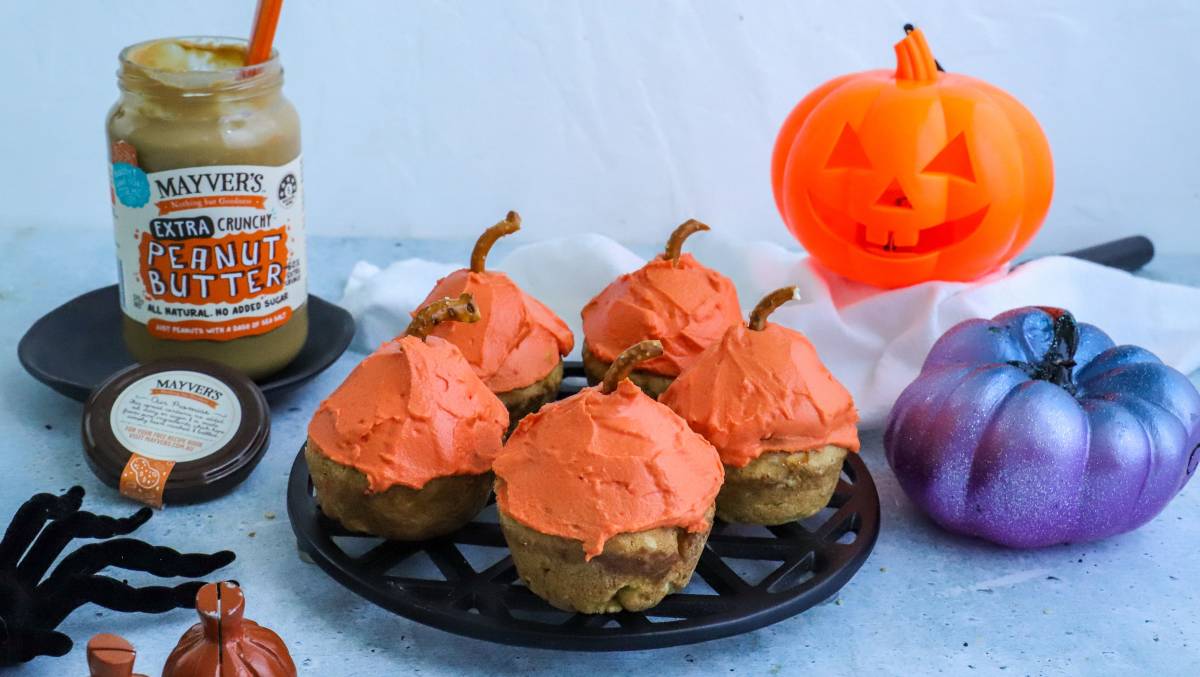 2. In a medium bowl, beat together the Mayver's Extra Crunchy Peanut Butter and maple syrup with a whisk, then beat in the eggs. Mix in the pumpkin puree, milk, baking soda, vanilla extract, cinnamon, ginger, nutmeg, allspice and a pinch of salt.

3. Add the flour and stir through until just mixed, don't over mix.

4. Distribute the mixture between 24 mini muffin holes. Bake for 20-25 minutes or until the top is golden and when a bamboo skewer inserted into a cupcake comes out clean.

5. Remove the cupcakes to a wire rack and cool completely.

6. To make the icing, beat together creamed cheese, butter. Add a few drops of food colour and mix, continue to add drops of colour and mixing until you have a pumpkin orange colour. 1. Preheat oven to 170C (fan forced). Line a Wiltshire Easybake square brownie pan with baking paper, ensuring the baking paper rises at least 2cm above the pan (these will be used as handles to pull the slice out of the pan once set).

2. To make the brownie layer, combine chocolate and butter in a small saucepan and heat over medium low heat, stirring, until melted and smooth. Remove from heat and stir in sugar. Set aside to cool for two minutes, then add the eggs and whisk well. Stir in the flour and coconut, then spread into the base of your lined pan and bake for 35-45 minutes. Set aside to cool.

3. To make the rocky road layer, combine the marshmallows, biscuits, snakes and coconut in a large bowl. Place the white chocolate in a microwave safe bowl and microwave in short bursts on half power, stirring between each burst, until completely melted. Combine the melted white chocolate with the other ingredients and stir well until completely combined. Pour into the brownie pan, on top of the brownie layer and level with an offset spatula. Using a sheet of baking paper, press down on the top of the rocky road layer to ensure it is compact and level. Top evenly with the Cadbury peppermint chocolate squares and set aside in the fridge to set.

4. Once set, melt the milk chocolate in the microwave using the same method as the white chocolate. Working quickly, spoon a teaspoon full of chocolate over each peppermint chocolate square, then pour the remaining chocolate on top of the slice and tilt the pan to move the chocolate around and ensure the top of the rocky road is covered. Set aside in the fridge to set completely, preferably overnight.

5. To decorate the top of your slice, remove the slice from the pan and place it on a board. Microwave the marshmallows for 20 seconds until melted, then stir with a spoon to combine. Leave for 30-45 seconds. Using just your fingertips, dip both hands in the melted marshmallow then press the fingertips of your hands together and pull them apart to form "cobwebs". Lay the cobwebs over your slice then repeat with more cobwebs until you are happy with coverage. If marshmallow cobwebs do not form, then the mixture may either be too hot or too cold. Either leave it to sit a little longer or reheat the mixture in the microwave for a few seconds. Top with candy eyeballs and serve! 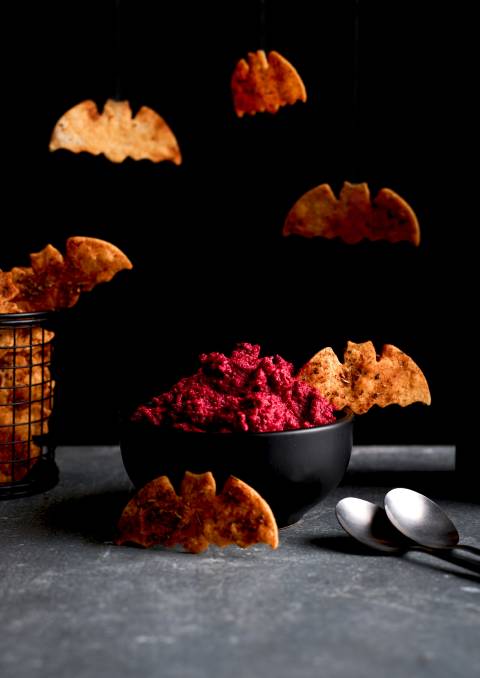 1. Preheat oven to 160C. Use a bat-shaped cutter on the tortillas, then arrange the shapes on a lined oven tray. Mix the oil, seasoning and salt, brush onto the bats, then bake for 15-18 minutes, until crisp. Cool on a wire rack.

2. Grate the apple coarsely and squeeze out the excess liquid. Put in a food processor with the beetroot, garlic and aioli and puree until smooth. Serve with the crackers. 1. Place the eggs in a saucepan of cold water and set over a moderate heat. Bring to a simmer then cook for eight minutes. Immerse in iced water until completely cold. Peel, then halve with a wet knife.

2. Gently scoop out the yolks and mash in a bowl with a fork. Mix in the mayonnaise and spices. Season with salt and pepper. Pipe back into the eggs. Decorate with prosciutto lines and a chive stem. 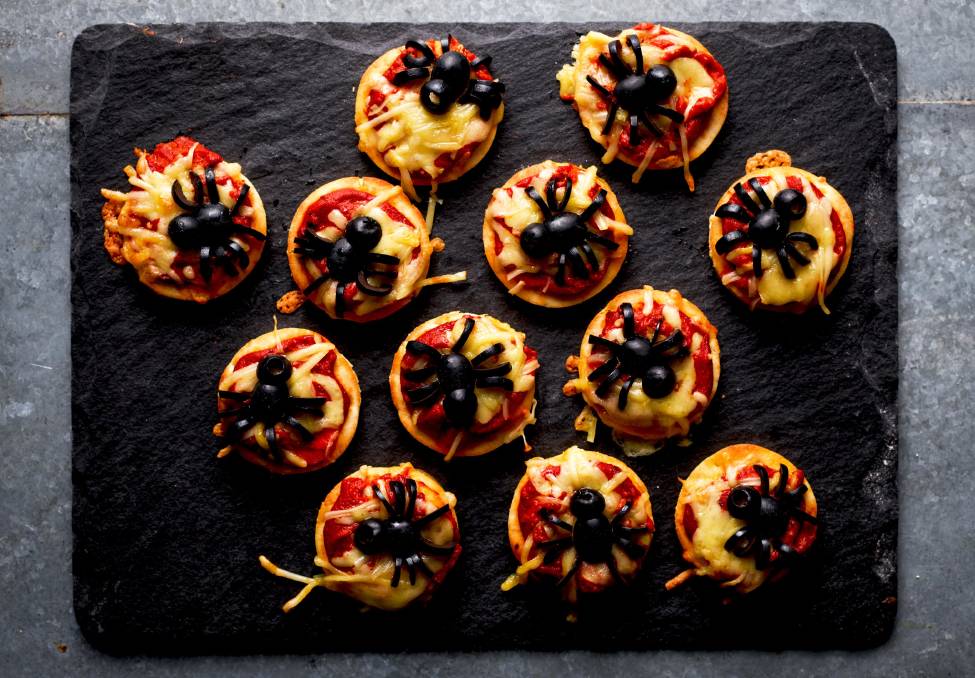 1. Preheat oven to 180C. Use a 6cm round cutter to make 12 discs from the pizza base. Arrange on a lined oven tray then top with sauce and cheese. Bake for 12 minutes, until the cheese is just golden.

2. Halve 18 olives lengthways and six olives across the middle. Use a long olive half for the spider bodies and an end piece for the head of each. Slice the remaining halved into four pieces each and arrange on the pizzas to make the spider legs. 1. Cut the apples into quarters, then cut a wedge out of the middle of each with a small knife. Fill with peanut butter.

2. Insert flaked almonds into the top and bottom of the open wedge to make teeth. Cut the rockmelon into small thin triangles and place in the mouths as tongues. Stick on candy eyes with a small amount of peanut butter. 1. Cut the cake into four slices, then make two 6cm discs out of each with a biscuit cutter, then insert a paddle pop stick into each. Freeze until firm. 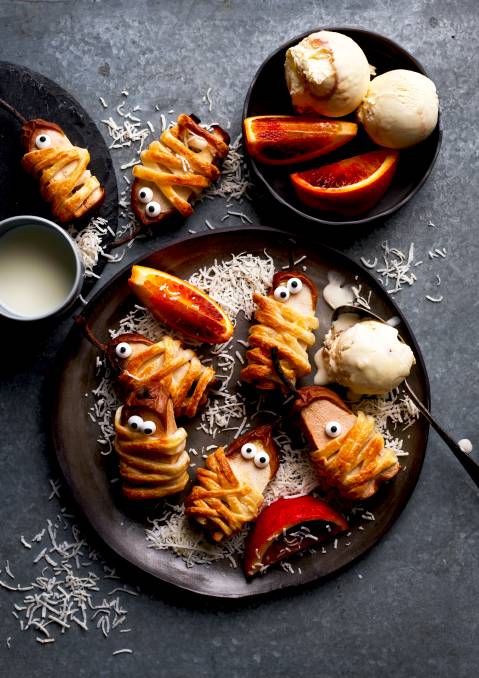 1. Preheat oven to 200C. Use a melon ball to remove the pear cores from the base, then use a small knife to slice off the cheeks of the pears. Reserve the pear trimmings for another use.

2. Slice the pastry into fine strips, then wrap around the pears in overlapping layers to make bandages. Brush with the egg, arrange on lined oven trays, then bake for 18 minutes, until golden and crisp. Decorate with candy eyes.

This story Spooktacular (trick or) treat ideas for Halloween first appeared on The Canberra Times.